I'm a Scientist: Supported by Wellcome and UKRI
Skip to content

Teacher In the Zone: ‘The buzz that this created in the classroom was huge’

When I started teacher training I had to do an exercise to get some young people to draw a picture of a scientist. Without exception they drew an Albert Einstein caricature, elderly, male, scruffy haired and inevitably wearing a white coat. This opened my eyes to some of the challenges that I would face.

I’m a Scientist challenges these preconceptions and encourages young people to learn for learning’s sake rather than because there are examinations to pass and targets to meet.With the event spread over a period of 10 weeks I was aware that some would maybe struggle to stay the course, but I was surprised by the group’s enthusiasm when I suggested it to them. 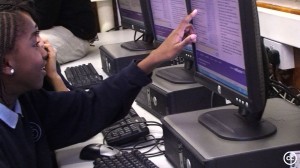 St Mary's Catholic School Question of the week: "How does radioactive things like chemotherapy help to cure cancer?"

Pupils registered on the website very eagerly and soon started asking questions of the scientists who were In the Zone that week. Even though work in class continued as normal, there was rarely a lesson that I was not greeted by pupils who were keen to check whether I had seen their question or tell me of the words of wisdom of the scientists who had helped them that evening.

The buzz that this created in the classroom was huge and I started to hear from parents about how engaged their child had become and how the whole family had been discussing science over the dinner table.

Pupils were regularly going home and voluntarily logging onto the Facebook style message board to check responses or to ask questions that had come up during the day. We chose a Question of the Week which appeared on screens round the school to raise the profile of the event. 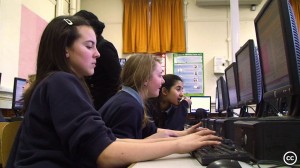 Book a live chat and get your students In the Zone!

Eventually we got round to our first “Live Chat” – the highlight of the experience for many students. The chat was booked for half an hour and pupils have never been so keen to get to class. As soon as the chatroom opened there was a flood of questions most of them sensible and thought provoking. This kept on going continuously for the half hour and in the end pupils were really disappointed to find out that it was time to go home but agreed that it had been a fantastic experience.

“hiya scientists, thanks alot for the great answers to our mind boggling questions“

It was possibly some of the best moments that I have had whilst teaching. To see all pupils, from the able to the less able, the quiet to the more confident totally engaged and motivated to learn and acquire knowledge was truly rewarding.

At the pupils’ request I have booked another live chat in July for the last week of the event, and the students are delighted that one of their favourite scientists will be taking part. Doubtless they will continue to take a full part in the event at home as well and I am sure that every member of the group will have gained a lot from their participation in I’m a Scientist.
Certainly from the point of view of a teacher I would never have believed that the event would have been so successful at getting pupils to really engage with the subject outside a classroom environment. I am sure that we will be keen to take part again next year and I would recommend it to any group.
There’s still time to get your students In the Zone! Book live chats for them now!